The days of boring rides will soon be long gone, as both Google and Apple are preparing a global launch of their infotainment systems. Based on Google Now, Android Auto seems to have the upper hand, though.

Turning Android Auto on couldn’t have been simpler. As soon as the smartphone is connected to the car through an USB cable and the Bluetooth connection is enabled, the Android device enters car mode. It should be noted that the Android Auto car platform can be controlled either via the car’s touchscreen or using voice commands, in case you’re dealing with a model that doesn’t come with a touchscreen. From here on, you would probably expect to see some sort of home screen, as Apple’s CarPlay comes with one. Instead, Android Auto bypasses the car’s infotainment system entirely, and displays a Google Now user interface. 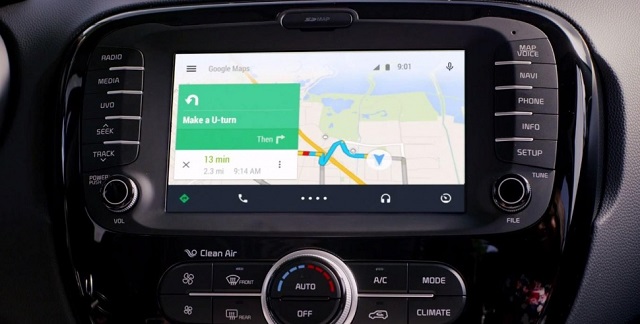 Only cards that are relevant to drivers will be displayed, so expect to see nearby points of interest, commute suggestions, warnings about traffic delays, as well as the weather forecast. The notifications from any other app are also displayed there, so you won’t have to navigate through an intricate menu to find out what you need to know. Setting reminders, something that Android smartphone users are used to do in Google Now, is also available on Android Auto, along with the ability to reply to text messages or place a call.

The utility bar found at the bottom of the screen features buttons for music playback. This is also where you can access navigation to get directions to your destination. Google is convinced that its car system will reduce the number of car crashes by helping drivers to keep their eyes on the road, rather than in the car’s infotainment system.

Android Auto was obviously conceived as an alternative to Apple’s CarPlay. However, most people believed that Google’s platform would be available exclusively to some automakers, while Apple’s infotainment system would only be featured in select makes. That whole exclusivity concept got shattered to pieces as the LA Auto Show, where a 2015 Hyundai Sonata was showcased featuring both of these systems. Expect to see Android Auto in a lot of cars next year, as General Motors, Volvo, Honda, Hyundai and Audi, along with 28 other automakers have decided to bring it to their cars.

Be social! Follow AutoCarb on Facebook and Twitter, and read more related stories about the DRIVE safe connected driving system, or the Tesla Supercharger open patent.