A successful test firing of the rocket that will power the Bloodhound SSC brought science one step closer to the 1000 mph car, with the British team behind the project igniting the propulsion system inside a hardened aircraft shelter at Newquay Cornwall Airport.

The place was originally used o protect fighter planes from bomb attacks from the outside. The engine has been described as a hybrid, running on a mixture of liquid high test peroxide oxidizer and solid synthetic rubber fuel and uses the V8 from a Formula 1 racing car as an ignition system, with designers claiming that it’s safer and more controllable than either either a liquid or solid-fueled rocket alone can be. 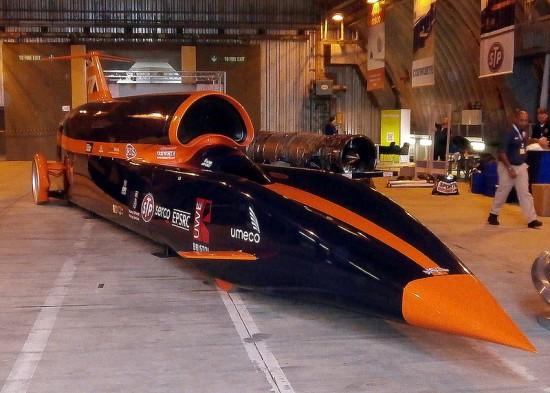 The engine is expected to have developed over 30,000 hp during the short 10-second burn. It was designed to produce a total of 80,000 hp and 27,500 pounds of thrust in competition trim.

The futuristic car will also feature a jet engine that will be used to accelerate the car to 230 mph before the rocket system is fired for the sprint to its target speed of 1,050 mph, expected to last 42 seconds.

Bloodhound aren’t the only company going for the “fastest car” project at the moment. Craig Breedlove is heading a team that will attempt to reach 800 mph  at the Bonneville Salt Flats in 2013. Another project project is run by Waldo Stakes, a general contractor from California who is aiming to hit 2,000 mph with a vehicle he is working on called Sonic Wind, which is built around the engine from the X-15 experimental plane that hit 4,159 mph in 1967.