Tesla Plans to Share Supercharger Patent with Other EV Makers

Elon Musk believes that opening the designs for Tesla’s Supercharger systems to other automakers can increase the adoption rate of electric vehicles. The announcement was made at the UK launch of the Model S.

The free fast-charging stations used by Tesla could soon become a standard if Musk has it his way. The company’s CEO mentioned in the past that he wouldn’t like the Superchargers to become a “walled garden.” Since it is a proven solution, Musk would like other EV makers to integrate into their own products Tesla’s innovative technology. 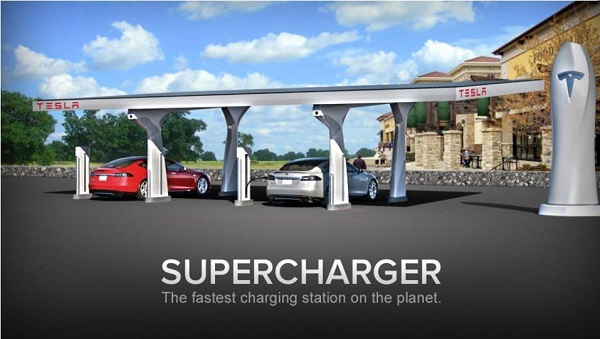 Needless to say, such a move would help the electric car industry progress a lot, even though there are some who believe that free power for life is the basis for an unsustainable business model. On the other hand, Tesla has a sister company called Solar City that generates energy from solar power both for the grid and for the Superchargers.

Musk’s decision to open the standard to other companies might have some layers that are not that obvious now. Most likely, he wants EV makers that adopt the Supercharger designs to contribute to expanding the network, as Tesla couldn’t possibly do all that on its own. If this company received at least some part of the government help that fossil fuel companies are getting, EVs would become mainstream much quicker. However, governments prefer to turn the blind eye on the asthma, cancer and global climate change caused by fossil fuels.

Some people even expressed their hopes that current EVs could somehow be upgraded to support charging from Tesla’s stations. While this is a bit unrealistic, it’s dreams like these that pave the road for progress. Tesla’s rivals may not share this automaker’s success, but they need to admit that an universal charging standard for electric vehicles could really change this industry.

By opening its Supercharger patents, Tesla becomes more like Google, fact that makes me appreciate the company even more. Personally, I think that sharing technologies, rather than keeping them hidden while suing the competitors, is the key to taking the world to new heights. I have no doubt that governments and Tesla’s competitors will oppose such a move at first, but the adoption of a universal charging standard is ultimately unavoidable.

Be social! Follow AutoCarb on Facebook and Twitter, and read more related stories about Jeep’s record sales in the US last month and the new 2014 Jeep Cherokee.